Improving the Reliability of Solar Panels in Large-scale Solar Installations

Claim your copy of the white paper by filling the form below.

Get your copy of the white paper

Improving the Reliability of Solar Panels in Large-scale Solar Installations

As costs continue to decline and communities around the world increasingly turn to sustainable energy sources, it is no surprise that global deployments of large-scale solar power plants are rising dramatically. A growing core of manufacturers is rushing to take advantage of this market growth, while driving aggressive expansion of solar panel manufacturing capacity to keep pace with demand. What is a surprise however, is that with this rampant manufacturing growth—unwavering in its goal of lowering cost—there is an escalating reliability challenge surrounding the growing number of solar panels hastily leaving many factories. 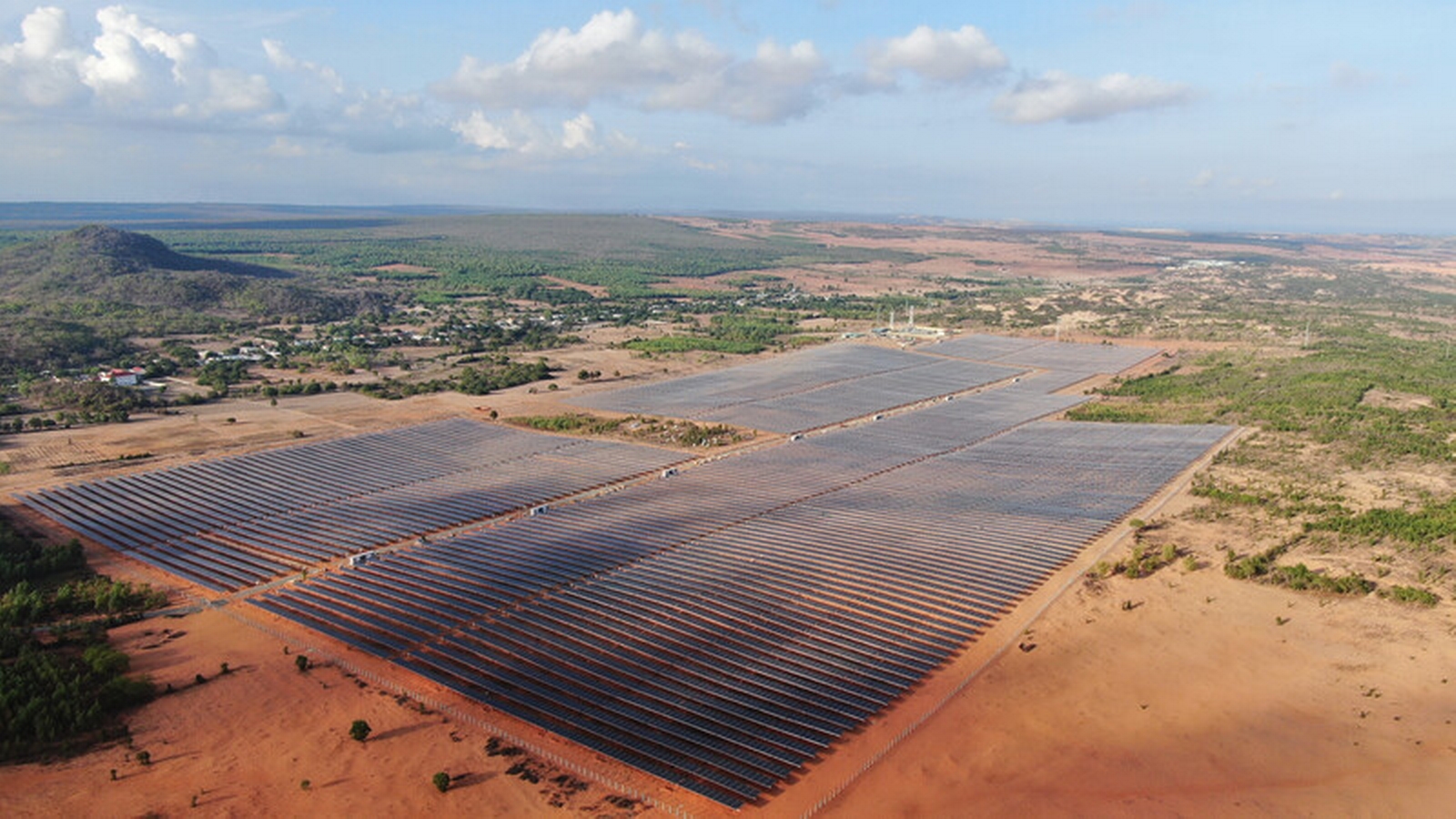 How does the reliability of solar panels impact system operation?

You do not have to look far to locate industry studies documenting consistent themes around the reliability of solar panels. In 2015, TUV inspected a total of more than 1.5 GW of systems globally, finding modules to be the cause of 48% of “particularly serious defects” in those systems.1TUV Quality Monitor, 2015. The most common culprits contributing to system losses were browning and cell cracks, Potential Induced Degradation (PID), delamination, and defective backsheets.

You might think that these reliability challenges would have been rapidly resolved, but according to a 2017 study, NREL found a daunting trend of more recently installed systems having a disproportionate rate of failures.2Jordan, et. al. “Photovoltaic Failure and Degradation Modes.” PiP, 2017. The youngest group of panels, built during a period of intense cost pressure, continued to show increased hotspots, increased diode and J-box issues, increased cell circuitry issues, increased encapsulant issues, and increased PID.

As the industry transitions to larger format, higher power panels in excess of 600W, the reliability challenges cited in these studies will only be magnified. Higher power density panels are extremely attractive to developers as they reduce land, balance of system (BOS) hardware, and installation labour—all of which drive down the levelised cost of energy (LCOE) of today’s large-scale installations. However, with an inordinate degree of fatigue and/or failure in more recently manufactured panels, the intended LCOE benefits can rapidly diminish with fewer panels installed per site.

While rapid manufacturing growth and cost-cutting supply deals seem to be detracting from long-term panel reliability, Maxeon Solar Technologies remains committed to improving the reliability of the SunPower technology we manufacture through design and engineering innovation. SunPower Performance panels ensure you can reap the benefits of higher power, higher output panels, without sacrificing the quality and reliability you expect. From their durable electrically conductive adhesive (ECA), to their redundant cell connections—we are focused on engineering-out the causes of fatigue and failure common to conventional solar panels. 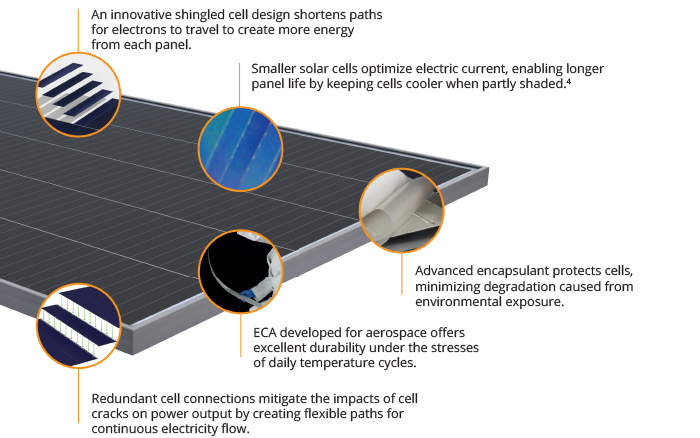 Electrically conductive adhesive increases SunPower panels reliability
The SunPower Performance panel eliminates the use of soldered cell connections—eliminating one of the major failure modes of conventional cells. Metallic connections expand and contract as temperatures rise during the day, and cool at night. This repeated daily stress can cause solder bonds to break and cells to crack. SunPower Performance panels use an advanced ECA originally developed in the aerospace industry. The ECA provides a robust solution with high electrical conductivity. This innovative approach increases the number of cell-to-cell contact points, while reinforcing each connection to withstand the stresses of daily temperature swings and corrosion over time.

Redundant cell connections keep current flowing
SunPower Performance panels mitigate the impacts of cell cracks on power output by creating flexible paths for continuous electricity flow. The approach ensures there is no single point of failure throughout the panel. In a conventional cell, cracks can propagate until reaching another crack or the ribbon of the cell. As cracks form throughout the cell, they inhibit the flow of current to the conductive ribbons. In the case of the shingled cell Performance panel, the shorter cell length limits the propagation of cracks, isolating cracks to a smaller area of the cell. The highly redundant ECA connections act as a “mesh” to maintain current flow.

Parallel circuitry lessens the effects of shading and soiling
The unique parallel cell architecture of the SunPower Performance panel ensures optimal performance against shading. When the panel encounters inter-row shade or soiling in landscape orientation, the panel loses power in proportion to the amount of shade covering the hypercell. In a scenario where an entire hypercell of a 5-hypercell panel is shaded, only 1/5 of panel power is lost, without activation of the bypass diodes. In comparison, current flows through conventional panels in a continuous series circuit. Any obstruction to this flow, can have detrimental effects on panel operation. Therefore, the panel is typically partitioned into three distinct electrical zones, allowing the panel to bypass obstructions to energy flow should one occur. A linear shadow cast along the bottom of the conventional panel forces one of the bypass diodes to activate, resulting in a 33% power loss.

High-quality material choices eliminate PID
Potential Induced Degradation (PID) has been known to cause more than 30% power loss in the field and has been routinely labeled “performance killer number one”. The root cause of PID has been identified as current leakage, typically brought on by use of poor-quality materials, frequent bill of material changes, insufficient design qualification, and/or poor manufacturing quality. In 2018, the SunPower Performance panel was certified as a Top Performer by DNV GL after 192 hours of testing, demonstrating 0% power loss as a result of PID. 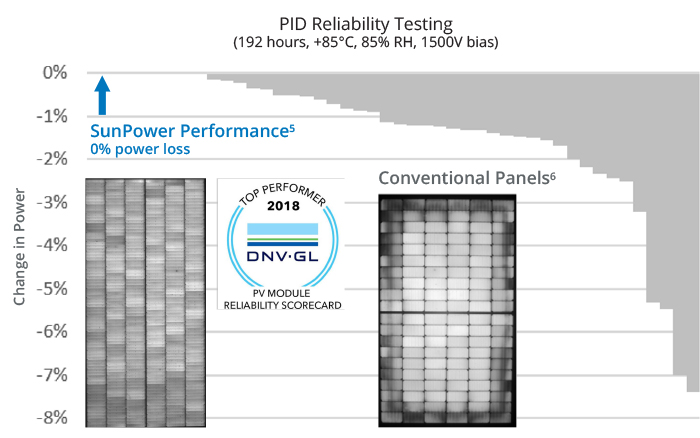 And what about hotspots?
Cell cracks, shading and soiling all increase stress on the panel, and can lead to encapsulant browning, backsheet embrittlement, diode failure, and most importantly, hotspots which represent a significant reliability risk to long-term system operation.

We invite you to learn more about how SunPower Performance panels mitigate the detrimental effects of hotspots along with other innovative design features of theirs.

Claim your copy of the white paper by filling the form below.

Download our insightful white paper by filling the form below.