The Importance of Patents in a Global Supply Chain

This blog is authored by Marc Robinson, Director of Intellectual Property and Corporate Counsel for SunPower Corporation. Mr. Robinson is a registered patent attorney in the U.S., and admitted to the bars in New York, Virginia and Texas. Mr. Robinson is also registered in-house counsel in California.

On October 8, 2019, SunPower was issued our second invention patent in China for the Shingled Solar Cell technology behind our SunPower Performance panels (also known as SunPower P-Series in the U.S.). This latest patent in China adds to a growing global portfolio of intellectual property (IP) rights behind one of the industry’s most innovative product portfolios, which also includes our SunPower Maxeon solar panels. At SunPower, we are passionate about securing IP rights for our solar panels and the processes we use to manufacture them—not only for the protection it provides our business, but for the confidence it gives our customers. Regardless of where you operate in the supply chain, from financing to importing to installation, working with solar technology that is backed by strong IP protections mitigates risk to your organization, and your customers.

Some Background on Patents

A patent, at its core, provides rights to exclude others from making, using, offering for sale or selling the patented invention, which is defined by the claims of the patent. The claims can vary in type—being granted with claims to a machine, an article of manufacture, a process, or a composition of matter. 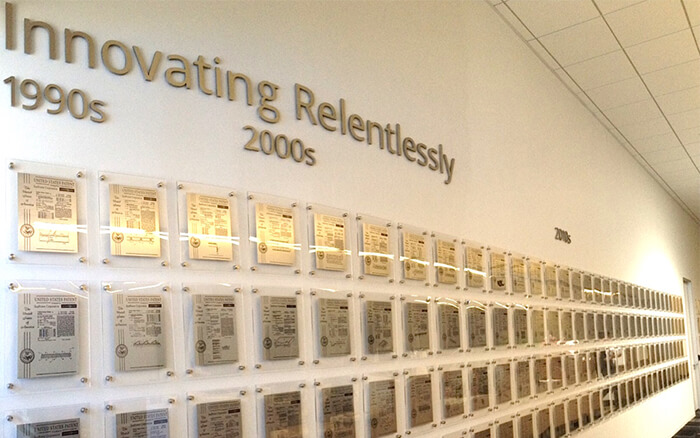 SunPower’s rich history of innovation is on display in our California office
where we recognize some of the key patents secured over the last 35 years.

While each country or jurisdiction differs in its treatment of inventions and patents, similar patent regimes exist in most countries via treaties administered by the World Intellectual Property Organization (WIPO), as well as local laws and regulations. Each patent granted in each jurisdiction provides distinct territorial patent rights that manufacturers, distributors, importers and end-customers must navigate to avoid patent infringement.

If one is found to be infringing a patent, then that infringer may be subject to an injunction, damages and/or the seizure and destruction of goods depending on the jurisdiction. Damages are usually structured to compensate the patent holder, and can be calculated based on lost profits, the infringers profits or a licensing fee.

Patents should be strategically developed in critical segments of a global supply chain, where components, materials and the underlying products can come from multiple countries—their respective origins can even change over the lifecycle of the product!

These circumstances present multiple challenges to developing a robust and effective patent portfolio, which takes years to develop. A U.S. patent, for example, generally doesn’t help in a situation where products are manufactured in China and supplied to Australia. Further, pursuing patents in every possible jurisdiction where a product could be supplied, manufactured or sold is prohibitively expensive.

Consequently, patentees generally prioritize patent filings in markets where they expect a significant risk of competition (and potential infringement). While this is a subjective analysis, according to World Intellectual Property Indicators 2019, China and the U.S. dominate patent filings. In 2018, China received approximately 1.5 million patent applications, while the U.S. received nearly 600,000.1https://www.wipo.int/publications/en/details.jsp?id=4464&plang=EN  In contrast, Australia, for example, received just shy of 30,000 patent applications that same year.2https://www.ipaustralia.gov.au/ip-report-2019-patents

With solar cell manufacturing concentrated in China, and the U.S. and China being dominant markets for solar panel sales, these countries have become primary markets for securing patents that cover products, components and manufacturing methods. However, additional markets, such as Australia, Japan and the EU, are of critical importance to solar manufacturers as they look to extend the value of their technology. 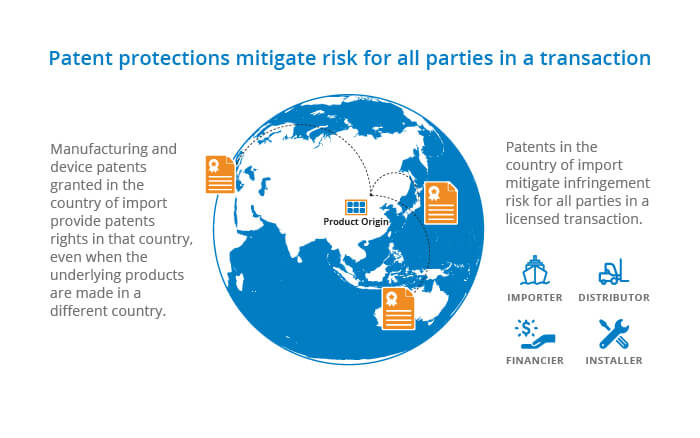 Once a product enters a market, the presence of domestic patents can impact all parties involved in the transaction—from the importer to the end-customer.

How can patents in markets like Australia be utilized?

In the case of a manufacturing patent, these rights extend to solar panels that were made according to the patented manufacturing process and then imported into Australia. Notably, in Apotex Pty Ltd v Warner-Lambert Company LLC (No 2) [2016] FCA 1238, the Federal Court of Australia stated “[t]he relevant act of infringement is not the use of the method outside the patent area but the exploitation (by importation and sale) in Australia of a product made using the patented method.”5https://www.judgments.fedcourt.gov.au/judgments/Judgments/fca/single/2016/2016fca1238  Similar patent rights exist in the U.S. under 35 U.S.C. 271(g), and in many other global markets including Japan.

How do SunPower’s patents help you, as a customer?

SunPower’s patents publish as patent applications or patents, which serve as “prior art” against competitors. Specifically, a competitor would not be able to obtain a valid, enforceable patent on a solar invention unless it was new and non-obvious over SunPower’s and everyone else’s prior art. Since customers, importers and distributors can be liable for patent infringement, buying products from a company, like SunPower, that has a strong patent portfolio helps mitigate the risk of patent infringement.

In 2015, SunPower acquired California-based Cogenra Solar, a company that had developed a unique cell interconnect technology that eliminated the need for soldering and copper connective ribbons: both sources of significant power loss and degradation in conventional solar panels.

By combining Cogenra’s Research and Development team with SunPower’s manufacturing and materials expertise, SunPower created a new, innovative product line: the SunPower Performance panel. Since that time, SunPower has manufactured and distributed more than 2 GW of Performance panels, making it the industry’s most deployed shingled cell panel to date. Numerous other manufacturers have since entered this space, resulting in an IP landscape that some participants might find confusing. As the first company to operate at scale in the shingled category, SunPower is confident in our product’s legal position. Not every company can make this claim.

Since development of the technology, SunPower has been granted numerous patents in the United States to protect the underlying technology and manufacturing processes behind our Performance panels. These patents are the basis for a growing international portfolio of shingled solar cell technology patents that we are actively securing. In 2019 alone, SunPower has been granted one European patent, two Chinese invention patents, and three Japanese patents to further strengthen the protections behind our technology. With additional pending patent applications in Australia and South Korea, which have been allowed by their respective patent offices, we will continue to strengthen the foundational IP protections behind our technology innovation across our entire product portfolio.