Disaster struck 300 kilometers off California's coast: a steel bolt on my rowing seat suddenly snapped in half. The wheel fell to the deck. My seat ground to a halt. I knew my journey was over unless I designed a solution.

It was Day 14 of the United World Challenge, my self-supported solo row from California to Hawaii. With SunPower panels onboard, I was rowing to raise scholarships to the United World Colleges, spark action to protect our oceans, and inspire others to believe in themselves. If this bolt was broken, I'd need to return home despite being just 10% into the journey, my goals unfulfilled after years of planning. If I could fix it, I'd have 4,000 kilometers of open ocean ahead.

Fear and doubt raged inside me as I stared at the sheared-off wheel. It was stupid to attempt this, I thought. I could hardly imagine rowing another 4,000 kilometers with a broken seat. I began to question if I had the skills to continue.

Just 300km at sea, Tez Steinberg looks down at a broken bolt that could end his 4,000 km journey.

I had boarded my boat, Moderation, two weeks earlier on July 3, 2020. Packed onto my small but mighty craft was three months of food and a suite of specialized gear: Global Positioning Satellite equipment, Automatic Identification System (a marine collision alarm I ran throughout the trip), satellite phones, a lithium battery system, and a desalinating watermaker. All this critical navigation, safety, communication and water-purifying equipment was powered by my onboard SunPower solar panels.

I would later face house-sized waves, scorching temperatures, and currents that pushed me back. I developed open sores and rashes from constant exposure to salt and friction. I didn't see another soul for 71 days, although I rowed past floating plastic and trash every single day. In the middle of the ocean, sometimes the people closest to me were in the International Space Station. But I took comfort in knowing that if I could power the oars, I could trust my solar to power the rest.
Terence ("Tez") Steinberg

Moderation had four SunPower solar panels producing 250 Watts that charged a 200Ah 12V battery bank - double that of ocean rowing standards. Rowing expeditions often struggle with power during overcast skies or equipment failures, but I knew that thanks to the reliable energy of SunPower panels, I could run my safety equipment, communicate with my team on land, and produce drinking water any time I wanted. This was a total game-changer, partly because it freed me up to realize something key: That broken bolt that stood between me and my dream was not a technical challenge. It was a mental one. 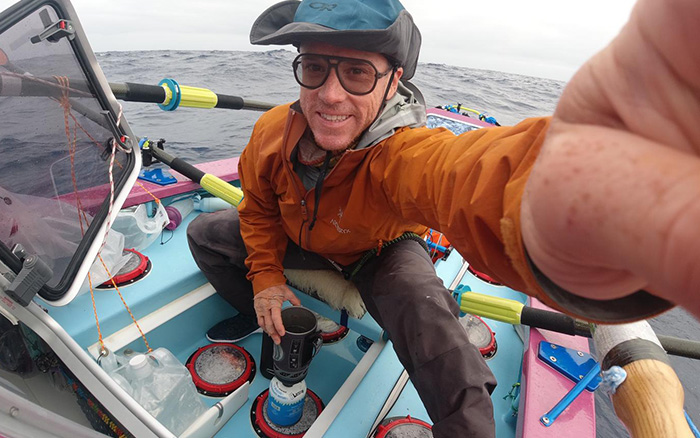 Tez Steinberg desalinates and purifies drinking water at sea with a machine powered by his SunPower solar panels.

I spent the next 8 hours studying the problem and testing repairs before cobbling together my first fix. Using a bolt just half the desired length, I reinforced its loose end with scrap wood jammed inside the seat's frame. And I rowed on. Then day after day, week after week, I improvised new solutions. I even molded new bearings by hand with melted plastic after other bolts bent and wore the wheels' bearings to dust.

It wasn't easy, but my perseverance was totally worth it. After seventy-one days and 4,300km of solo rowing, I arrived in Hawaii, deeply inspired by the ocean's beauty and humbled by the lessons it taught me. If my trip had ended on Day 14, Moderation would not have collected the world's first dataset on open-ocean airborne microplastics in partnership with Scripps Institute of Oceanography. And my team could not have created the Ocean Classroom Campaign, the world's first map-based, open-source coding curricula to teach high school students marine science through adventure. 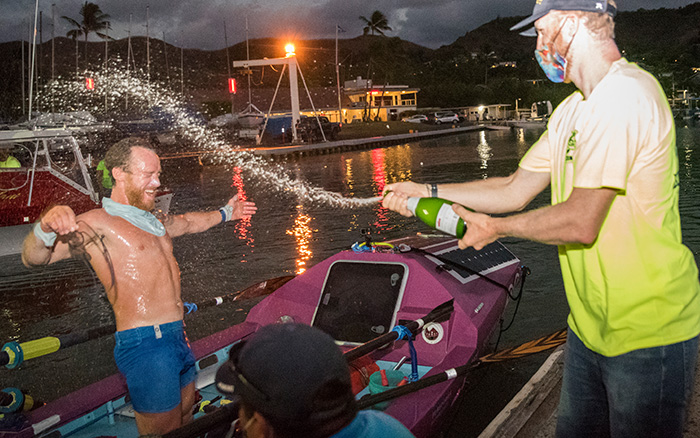 Tez Steinberg is greeted by teammates in Hawaii after 71 days solo at sea.

Ultimately, thanks to a generous community of supporters, the United World Challenge raised over $76,625 for scholarships, funded the collection of nearly 200,000 ocean-bound plastic bottles, and inspired thousands of people during this period of unprecedented social change.

Looking back after three months ashore, there's just one thing I might change. I wonder, did I make it harder on myself than necessary by doubting my abilities? What if I gave myself the same trust I give to my SunPower technology? I can't go back to Day 14 to find out, so it's a question I intend to answer in my next expedition for good.

Tez Steinberg is the 8th person to row solo and self-supported from mainland USA to Hawaii, and the only novice to complete it on his first attempt. His journey, the United World Challenge, began July 3, 2020 and finished September 11, 2020 and was supported in part by SunPower panels. Learn more at unitedworldchallenge.org.