Quenching the Thirst for a Better Life

What would you do if tens of thousands of people turned to you for help?

What if their lives depended on you, right now?

And what if the decisions you made today would affect their families and communities for decades to come?

For most people, that much responsibility would be overwhelming. But for Water Mission, a non-profit organization dedicated to supplying safe water in developing countries and disaster areas, it’s a calling. Since 2001, they’ve combined a deep sense of compassion with advanced engineering expertise to provide safe water for drinking, sanitation, and hygiene to more than 4.5 million people in 56 countries around the world. It’s a remarkable achievement. And as the number of people in need continues to rise globally, the clean water innovators at Water Mission have come to be recognized as clean energy pioneers, as well.

We customize solutions for each community we serve, while working closely with the local recipients. A successful project is one that results in more time for work and education, improved health, and increased productivity for the community.
George Greene IV, PE, President and Chief Operating Officer, Water Mission

By integrating solar energy into water pumping solutions, Water Mission can provide safe water in challenging environments that often lack access to fuel or grid electricity. The approach not only lowers long-term system operation and maintenance costs but ensures a reliable source of energy to maintain water flow and pressure that can meet the needs of its users—which can number in the tens of thousands at a single pumping station.

Having a consistent source of energy from solar enables Water Mission to further treat, store and distribute safe water where people most need it. It’s a sizeable task for Water Mission, and one they’ve entrusted to the enhanced reliability and durability of SunPower® solar technology which is uniquely suited to ensuring Water Mission continues to provide communities with safe water for decades to come. 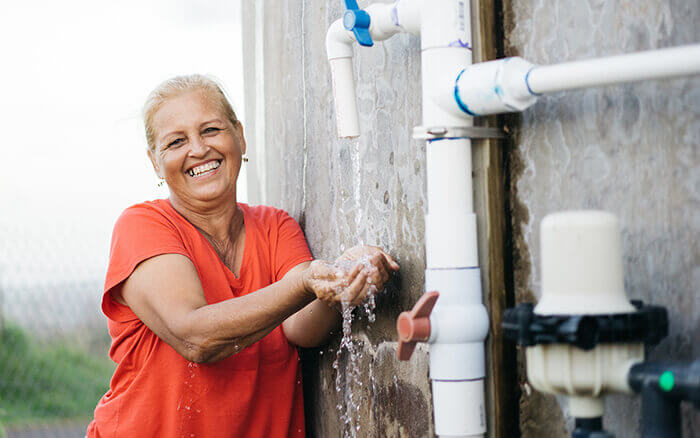 With more than 1,400 solar-powered water pumping installations worldwide, Water Mission was perfectly suited to support the recovery efforts in Puerto Rico following the devastation of Hurricane Maria in 2017.

From catastrophic storms like Hurricane Maria in Puerto Rico and Hurricane Dorian in the Bahamas, to the remote Nyarugusu refugee camp in western Tanzania, Water Mission is there, providing safe water—and hope—to those who desperately need it.

The Nyarugusu refugee camp, where Water Mission’s ongoing relief efforts provide water to more than 145,000 residents, is perhaps one of their most impressive efforts to date. The organization’s latest installation features a ground-mounted solar system with nearly 300 SunPower® Performance panels that produce enough clean power to pump and purify water from boreholes drilled deep into the earth, an easier and safer process than treating the muddy, contaminated river water source originally used. When it’s complete, Water Mission expects this will be the world’s largest solar-powered water treatment system—and a model for other aid organizations to learn from.

A 99.4kW SunPower Performance panel system installed at one of the boreholes in the Nyarugusu refugee camp.

Established in 1997, Nyarugusu is effectively a small city that continues to grow every day—and will be home to many more refugees for years to come. Facing violent political unrest and economic decline, hundreds of thousands from Burundi have fled to Tanzania. The constant influx of refugees has overwhelmed the area’s already insufficient resources. So, not only do Water Mission systems have to work hard every day, they need to last for decades.

The engineering team at Water Mission chose to partner with SunPower on its expansion project in Nyarugusu for many reasons—including SunPower’s nearly 35-year track record in solar technology and performance. The aptly named SunPower Performance panels are built on an innovative shingled cell design that eliminates many of the reliability challenges of conventional solar panels.1 “Conventional Panel” is a 16% efficient panel made with Conventional Cells. “Conventional Cells” are silicon cells that have many thin metal lines on the front and interconnect ribbons soldered along the front and back. Fragile ribbons and solder bonds have been removed from solar cells to expand the active cell area, while flexible and redundant connections keep energy flowing throughout the panel. The result for Water Mission is a high-performance, highly reliable, long-life panel warranted for 25 years, with an expectation to last much longer.

Solar is a dependable, cost effective, renewable source of energy, which is a key advantage in situations where other power options are non-existent or have been destroyed.
Seth Womble, PE, Water Mission’s Executive Vice President of Programs

Communities from Indonesia to Mexico, Kenya to Peru depend on Water Mission treatment systems—so any solar technology providing power to these water systems must not only be reliable, it must be able to withstand the most extreme conditions. SunPower Performance panels are engineered with materials innovations that range from proprietary encapsulants to aerospace-grade conductive adhesives that protect cells and minimize power loss from exposure to harsh environments—including arid deserts, wet and humid rain forests, and windy coastlines.

One of Water Mission’s key reasons for going solar was to be able to provide safe water, reliably, often in life and death situations, without relying on diesel generators or grid power. Beyond the health and environmental benefits of solar over coal-based energy sources, SunPower’s arrays help Water Mission achieve greater uptime in their systems, while significantly reducing system lifecycle costs. 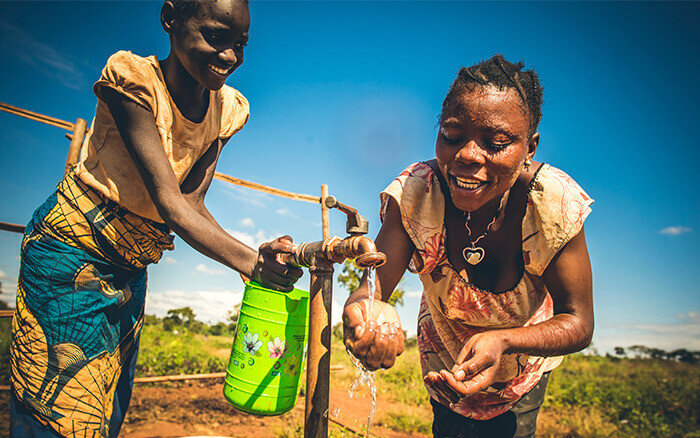 Being able to access clean water, where and when it is needed, is life-changing for those at the Nyarugusu refugee camp—creating more time for work and education, while improving the general health of those in the community.

Every day, the lack of safe water and the resulting prevalence of waterborne diseases deprive thousands of people of good health, education, and opportunities to provide for their families. Not only does Water Mission provide hope and safe water for countless people across the globe, its efforts are advancing the adoption of clean, solar power to run these systems.

In 2017, Water Mission was recognized for their unique in-house expertise to independently design, operate and maintain solar water solutions by the International Organization for Migration (IOM). In turn, this recognition has led to opportunities to help shape industry best practices for developing countries alongside the United Nations International Children's Emergency Fund (UNICEF), the United Nations High Commissioner for Refugees (UNHCR), and the Rural Water Supply Network. And as a true technology leader and pioneer, Water Mission also guides other organizations in the design and implementation of safe water solutions.

Water Mission is building a legacy as both a visionary nonprofit organization and as a solar pioneer. Day in and day out, their efforts to provide safe water through hard work and leading-edge innovation help people in some of the most remote regions of the world live longer, healthier lives.