Solar Panels That Work as Hard as You Do

Not All Solar is the Same

Shopping for solar panels can be complicated, even for industry professionals. When Christer Rygaard of SunnyFuture AB started his installation business, he researched SunPower and several conventional solar brands. While he understood on paper that SunPower panels were the most efficient panels available1Based on datasheet review of websites of top 20 manufacturers per IHS, as of May, 2019., he also knew they were more expensive. He decided to install mostly conventional panels until he could do more real-world research on SunPower's value.

That research became personal when he installed 39 conventional n-type solar panels on his own home and later installed a similar size SunPower array on a neighbor's house. SunnyFuture monitors all systems, and Rygaard soon noticed that his neighbor's system was generating more power in the morning. Because Rygaard's system was visible on the SunnyFuture website, his neighbor with SunPower panels called frequently to brag about his higher energy production.

It was the fact that my friend's SunPower house started producing earlier in the day that I realized that there is a difference between panels, that they are not the same.
Christer Rygaard, Founder and CEO of SunnyFuture AB

When Rygaard made an in-depth comparison, he saw a 12% annual difference in energy production - much more than he expected. SunPower panels were generating energy earlier in the morning, later into the evening, and more overall. Even more interesting, the SunPower system was outperforming his conventional system despite installing 9% fewer panels on the roof. After checking the data on a few more systems, Rygaard became so convinced of SunPower's early morning advantage that he converted his business to exclusively install SunPower panels. 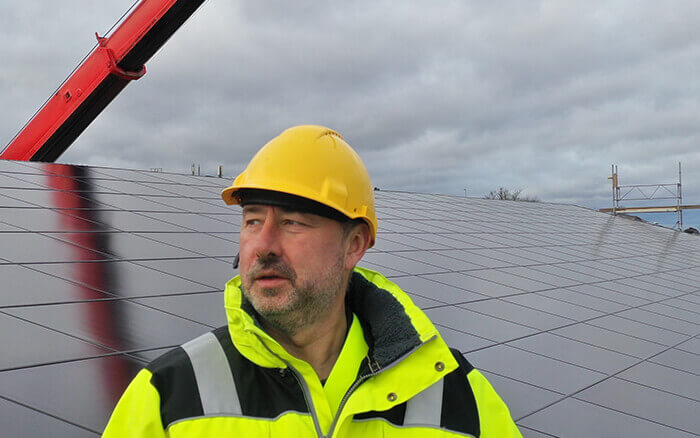 Rygaard did not make the move lightly. Sweden's harsh winters and heavy snowfall make reliability as important as power to his customers. Fortunately, SunPower Maxeon panels demonstrate the highest reliability in large scale studies2Jordan, et. al. Robust PV Degradation Methodology and Application. PVSC 2018 and SunPower offers the industry-leading Complete Confidence Warranty - the most comprehensive product and power warranty of any manufacturer.3Based on October 2019 review of warranties on manufacturer websites for top 20 manufacturers per IHS 2018.

While not a laboratory comparison, the two sites have many real-world similarities. Both systems have rated power of 11.7kW, face nearly the same direction, use the same inverter technology and encounter similar weather as they are just 6 kilometers apart. The photo below shows the rooftops of Rygaard's installation and his neighbor's home – Rygaard likes to joke that both homes are even the same colour yellow. 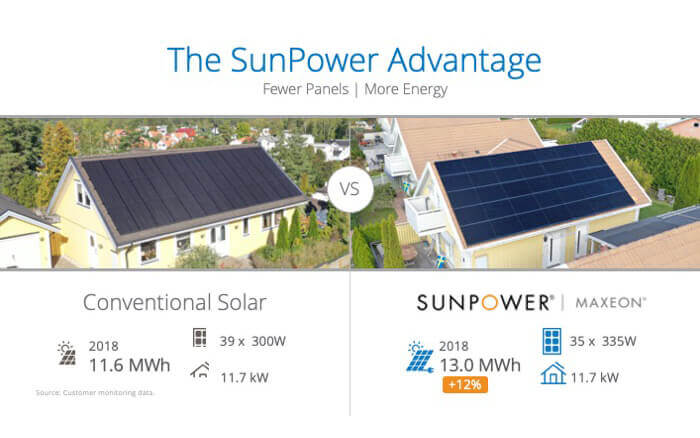 Disclosure: A table below details some minor site differences: the 'azimuth', or compass facing, of the roof is slightly different, and favours SunPower. The impact of shade is lighter at Rygaard's home, favouring the conventional panels. However, these impacts should have a net impact of less than 5%.4Based on estimate by SunnyFuture, designer and installer of both systems.

Across a full year (2018), the SunPower system generated 12% more energy than the conventional system despite using 9% fewer panels on the roof.5Source: Customer monitoring data. 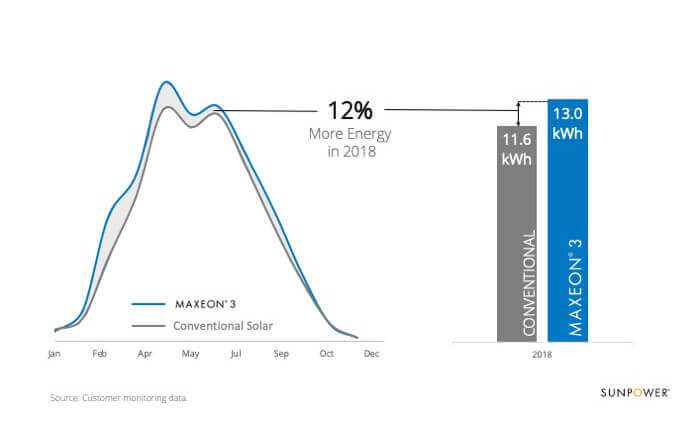 The higher output is partly due to a spectral advantage that SunPower's Maxeon panels have over conventional solar.6Spectral shift occurs when light passes through particles on the way to the panel that causes the "color" to shift, since certain wavelengths are filtered out. For example, clouds block visible light, but has less effect on UV which "shifts" towards blue and red. Another example: late in day, light passes through more of the atmosphere, shifting color towards red. Maxeon panels are more receptive to blue light (early in the day, or during cloud cover) and red light (late in the day). Access to a broader spectrum of light results enables more energy when the sun is at lower angles. This is because the light is "red-shifted" as it passes through more of the atmosphere. The effect is especially pronounced during the winter season and in northern latitudes. 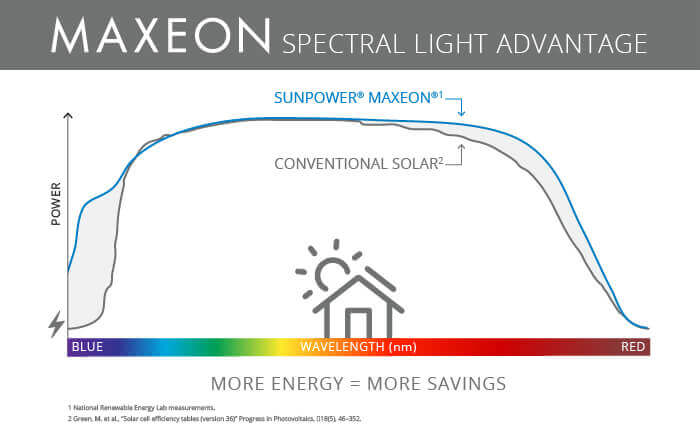 Depending on the season, monitoring data shows that the SunPower panels frequently begin producing power between 15 minutes and 2 hours before and after the conventional panels7System data from customer monitoring. Sunrise/sunset data from <a href="https://www.sunrise-and-sunset.com/en/sun/sweden/taby/2019" target="_blank">https://www.sunrise-and-sunset.com/en/sun/sweden/taby/2019</a>, contributing to a stronger energy performance.

Customers Respond to the Switch To 100% SunPower

Customers have rewarded Rygaard's decision to exclusively install SunPower panels. "We've tripled our 2018 sales compared to 2017, and so far for 2019, we will increase 50% more over 2018," he reports.

Rygaard says that most of his business is from word-of-mouth referrals, earned from a personalized process. Instead of advertising, he meets customers in person to discuss SunPower's higher energy yield, quality, and durability and shows the results from his own case study.

Rygaard's residential success has also led to SunnyFuture being awarded several high profile commercial solar projects. His next project, however, is to add SunPower panels on his own roof to support additional energy needs. Now that he knows the difference, the choice is obvious.

Want to learn more about our solar technology?